I'm not just talking about CD's and tapes, I'm talking about the stuff that went with those things. Back when physical media was the only media you needed special furniture for them. Remember having a cabinet or shelf that you only used for VHS tapes? Or those ones with the little slots for cassettes and cd jewel cases? Ikea currently sells a nice little wooden shelf in the kitchen dept that fits cassette tapes like you wouldn't believe. But those things aren't the end of the world. You expect full hifi systems with incorporated vinyl record storage and liquor cabinet to get phased out after a while. But what about like, really specific things...

Back in 2006 I worked at a commercial audio shop. Their bread and butter was those in-ceiling speakers for schools and offices but we also had high end stuff for custom home audio jobs. Now remember that this is the era of the iPod and the big deal then were those Bose iPod docking stations. Every MP3 player needed a docking station to charge and play from at the same time or you just weren't cool. Anyway, we sold these docking stations that would be installed in the walls of your house that would connect to a receiver/mixer combo somewhere in a closet or in the living room with the massive plasma TV. 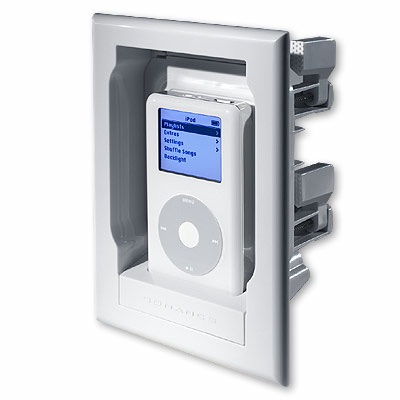 These days I sit and wonder about the folks who had this shit put in their house. Do they still have a big square cut into the wall with an old school iPod port in it? Do they still have that old click wheel iPod they paid $400 for? Did they just go and put their new iPhone in the wall the next year? I kind of feel bad for the early adopters of expensive things that get phased out so quickly.